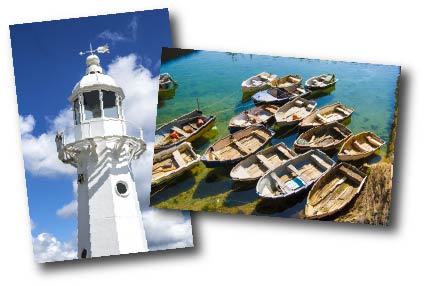 Mevagissey is an attractive old town with narrow streets and steep valley sides that lead down to the old fishing harbour which provides a safe haven for the many fishing boats that are moored there.

Around the harbour and along its pretty streets you will find many colourful pubs, seafood restaurants, cafes, galleries and shops.

Named after two Irish saints, St Meva and St Issey, Mevagissey dates to at least 1313 and prospered during the 19th century due to the abundant source of pilchards out to sea. It also has a tradition of boat building dating back to 1745.

Fishing trips can be taken from the harbour and there is a ferry to the nearby port of Fowey.

This small town is delightfully situated on an attractive stretch of the Cornish coastline which also offers some lovely walks.